The plot of the game Best News Mag Deus Ex, released in the year 2000, is centered in the year 2052. The skyline of New York City depicted in this game did not feature the twin towers on the game’s release. The developers reasoned that they had been destroyed in terrorist attack previously in the game. This was over a year prior to the 9/11 attacks.

In a Space strategy game, the decisions that gamer(s) take during the course of the game makes a difference in the outcome of the game. When playing these games, players need to be aware of the developments that take place in the game. What seems like a minor happening can have a momentous impact on the final outcome of the game. These games demand, from the players, the ability to think ahead of the current scenario and have a second plan ready in case the desired outcome is not achieved.

Many are fascinated by space. They are hardcore fans of Star Wars, Star Trek, and the like. Add some strategy-building abilities to this fascination, and be ready to be entertained for hours together, by some of the best space strategy games available. 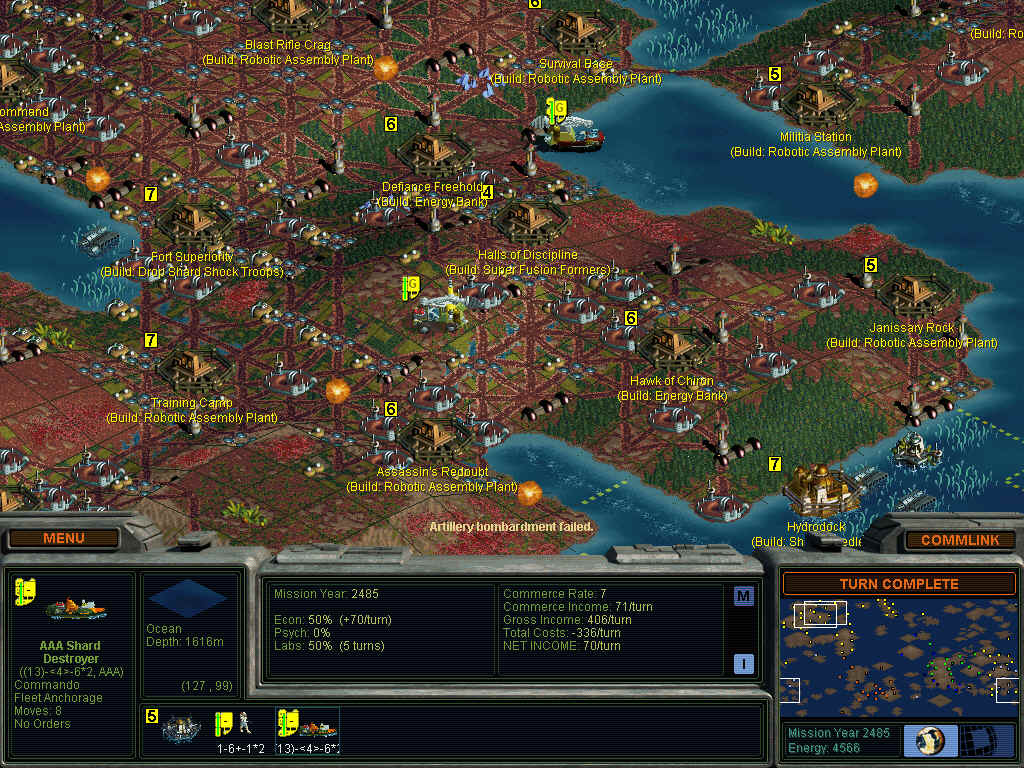 This turn-based game has been developed by Firaxis Games. It belongs to the 4X genre. In this genre, players need to expand, explore, exploit, and exterminate an empire. The plot is futuristic and set in the 22nd century. The gameplay is from a third-person perspective, and it has been directed by Sid Meier. The strategies in the game revolve around the idea of colonization of space. Players can choose to be the leader of any one of the seven available factions. This game is a spin-off of the civilization series. It was released in 1999 and is compatible with Linux, MAC OS, and Windows platforms.

Alpha Centauri is built around the framework of Civilization, and as such, a lot of it looks like a sci-fi re-skin. Wonders are replaced with secret projects and workers with terraformers. Cities are colonies, while chariots are scout buggies. But make no mistake, Alpha Centauri is its own game. Each unit is a combination of various components that you can rearrange to your heart’s content. It’s not as frustratingly complex as many 4X games, but it gives you just enough tactical flexibility to tweak units to fit your style. You can stick with the presets, or you can make heavily armored colony pods mounted on speeders. It’s only as weird as you make it.

Early in the game, you encounter the native Mind Worms, rolling monsters that attack with psionic powers and make the heads of lesser men explode. They spawn from nasty tiles of Xenofungus, which hinder movement, strangle resources, and more importantly, produce more Mind Worms. They might look like re-skinned barbarians, but unlike their primitive Civ brethren, the Mind Worms are with you the entire game. In fact, how you decide to deal with them is one of the most compelling reasons to still play the game today.

You see, each faction is divided along ideology. You have the warriors and the peacekeepers, the industrial capitalists and the hive-mind communists. Those ideologies not only give each faction various inherent bonuses (not unlike the governments in Civ IV) but can also influence the story. That’s right, Alpha Centauri actually has something of a real storyline revolving around the native life on the planet. At various points, you’ll receive text-based interludes describing your leader and his various struggles with the Mind Worms. The planet treats the colonists as an invasive species, one that is utterly alien to its integrated, psionic environment. As a world leader, you can either eradicate the natives, merge with them, or just ignore them; it’s up to you. It’s a clever design choice that makes you think about the game as more than just a fancy spreadsheet.

I had a really easy time getting back into SMAC, but it might not be quite as smooth to the palate for those weaned on later Civ titles. The interface is large and bulky by modern standards, and many important features are hidden away behind menus. For example, common actions like automating a scout or terraformer can’t be found under the right click menu, but rather require you to click the main menu button and dive a few levels deep. It’s only an initial annoyance until you learn the hotkeys, but it does remind you how far games have come, interface-wise.

As with so many time-honored games, Alpha Centauri sold poorly in its day. While there are plenty of mods that seek to recapture the magic inside the modern confines of newer engines, nothing ever quite matches up. And that’s ok because Alpha Centauri is still playable. It still has a unique flavor that is unlike anything else. If you’ve ever lost an evening (or morning) to Civilization, Alpha Centauri is well worth the $5.99

Sins of a Solar Empire 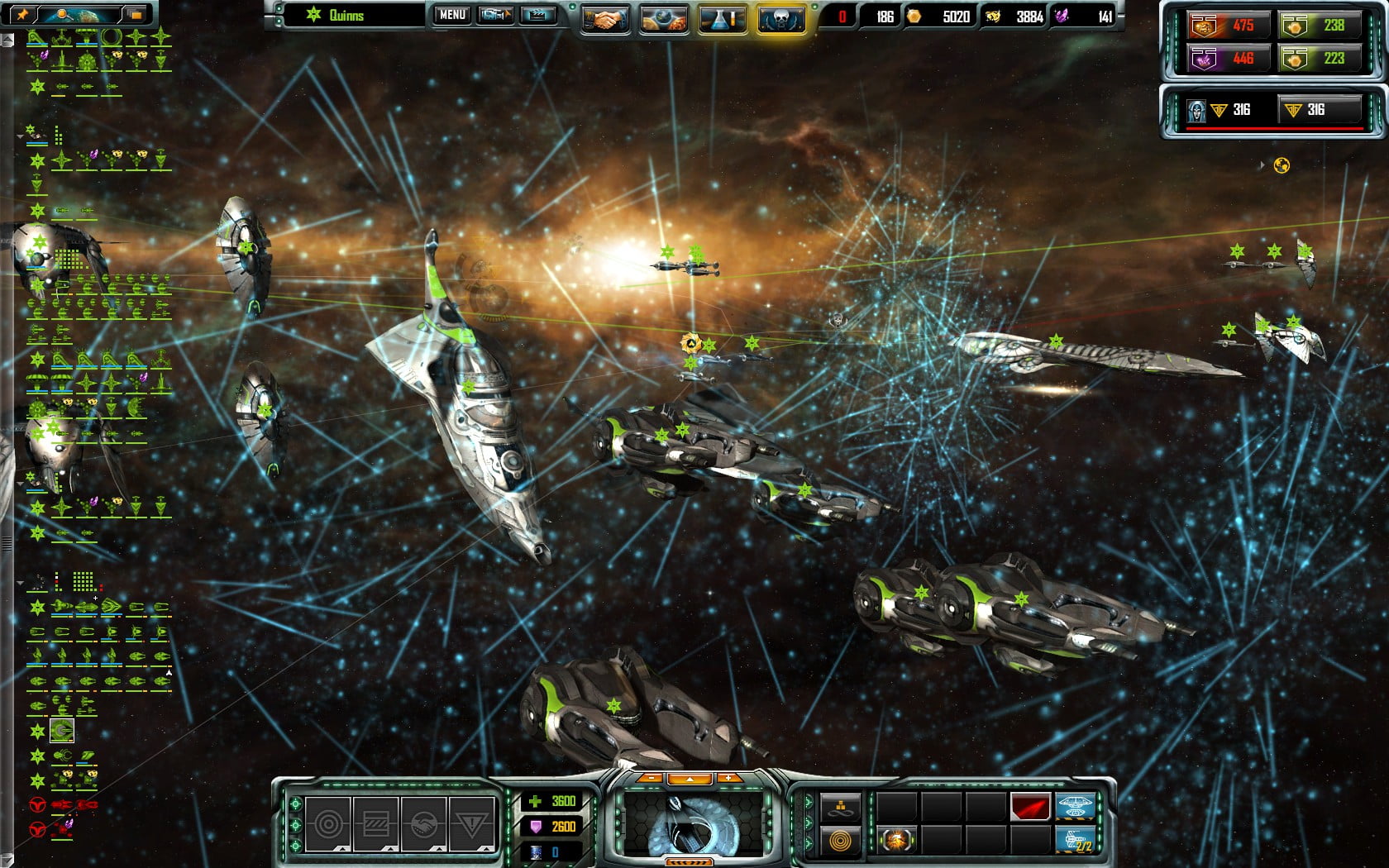 This game has been developed by Ironclad Games. It is a real-time game and belongs to the 4X strategy genre. Here, players can choose to be the leader of any one of the three races – Trader Emergency Coalition (TEC), Advent, and Vasari. Leaders have control of their space empires. The goal here is to conquer different star systems. There are four packages of the game that have been released so far. The first was Entrenchment, followed by Diplomacy. The third package was Trinity. The rebellion was as the fourth stand-alone package of this game. This game was released in 2008 and is compatible with the Windows platform.

The  DLC not only embiggens pirates, it adds militias to the game that “will grow, raid nearby systems, and repopulate over time”. As with pirates, you’ll be able to pay militias to do your bidding, using them “to help defend your worlds, or coordinate your attacks with their strikes for maximum impact”. Why can’t everyone just get along?

Outlaw Sectors will set you back $4.99/£3.99 and promises to add plenty of new options, along with 11 new maps. Here are the main bullet points, from the Steam page:

This game has been developed by Petroglyph Games. The showdown in this game is mainly between Empire and Rebels. Players can choose from three available game modes. These are Campaign, Galactic Conquest, and Skirmish. In this game, at times, there are land battles along with space battles. It is a real-time strategy game, which was released in 2006. Later, in the same year, an expansion pack was released for the game. This was titled Star Wars: Empire at War: Forces of Corruption. This game is compatible with Windows and MAC OS platforms. 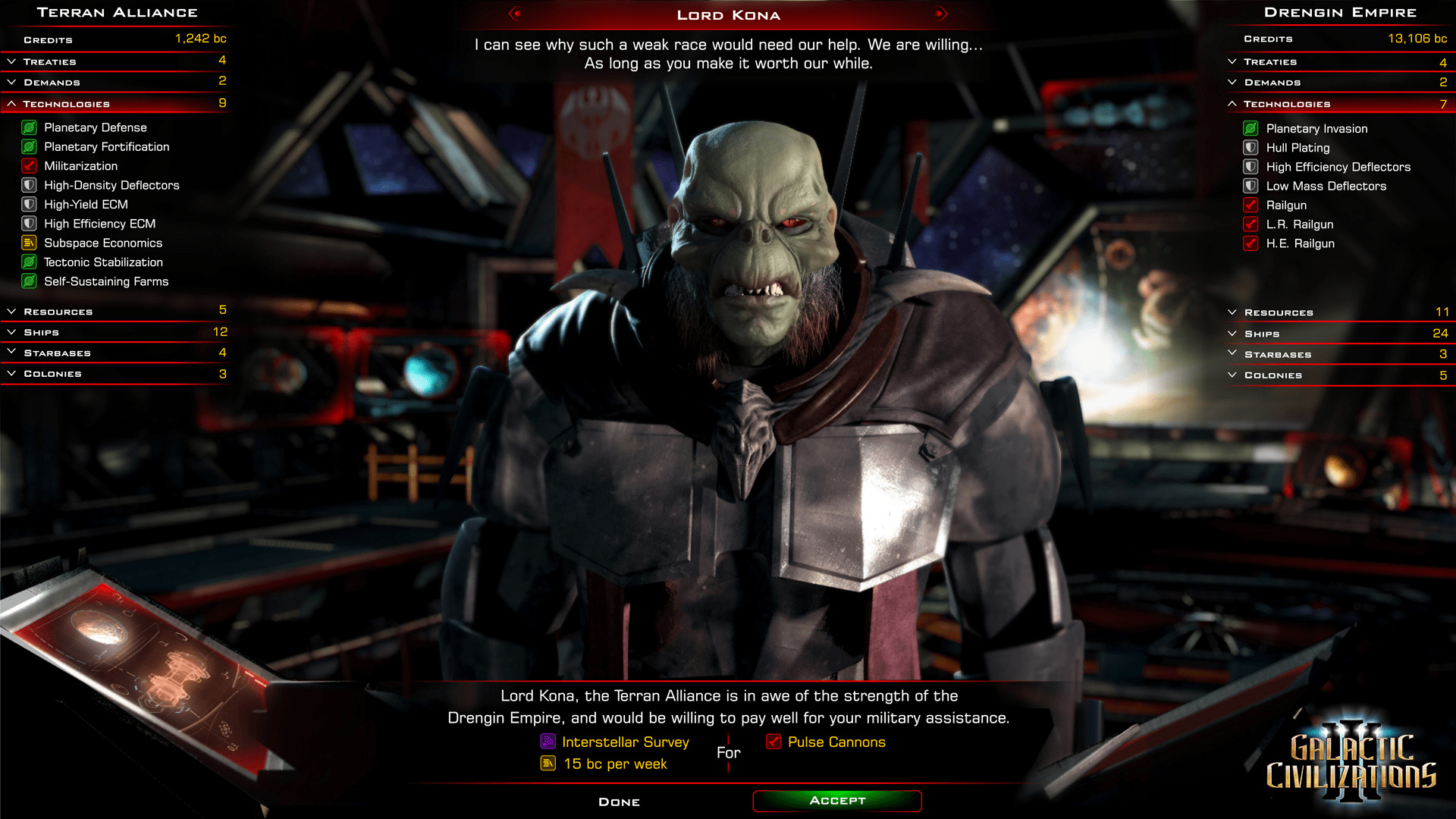 This is another turn-based strategy game, which has been developed by Stardock. The plot of this game is based in the 23rd century. Players are only assigned the human race. The player becomes the leader of the human race, and the goal to be achieved in this game is of galactic domination through colonization of the space. This game does not support multiplayer gameplay. The player has to play against AI (Artificial Intelligence) opponents. He can choose from various civilizations, which are Terran Alliance, Drengin Empire, Altarian Resistance, Arcean Empire, Yor Collective, Torian Confederation, Dominion of the Korx, and Drath Legion. This game was released in 2003 and is compatible with the Windows platform.

Lords of the Black Sun

This game was previously titled Star Lords. It is a turn-based game of the 4X strategy genre. You can play this game with multiple players along with AI. Players have eight races to choose from, and they are assigned as the leader of the race they choose. These leaders rule their empire, where the goal is to achieve space colonization. The game has been developed by Arkavi Studios. It was released in 2014 and is compatible with the Windows platform.

This again is a turn-based game and belongs to the 4X genre of mystery games. It has been developed by Simtex. Like most other games on this list, the goal here is to develop colonies in space. This game has its focus on colonization of the star systems. There are ten races available for the player to choose from. This is not one of the multiplayer space strategy games for PC. It is a single-player game, and players are pitted against AI. This game was first released in 1993 and is compatible with MS-DOS, Apple Macintosh, and Commodore Amiga.

Sword of the Star 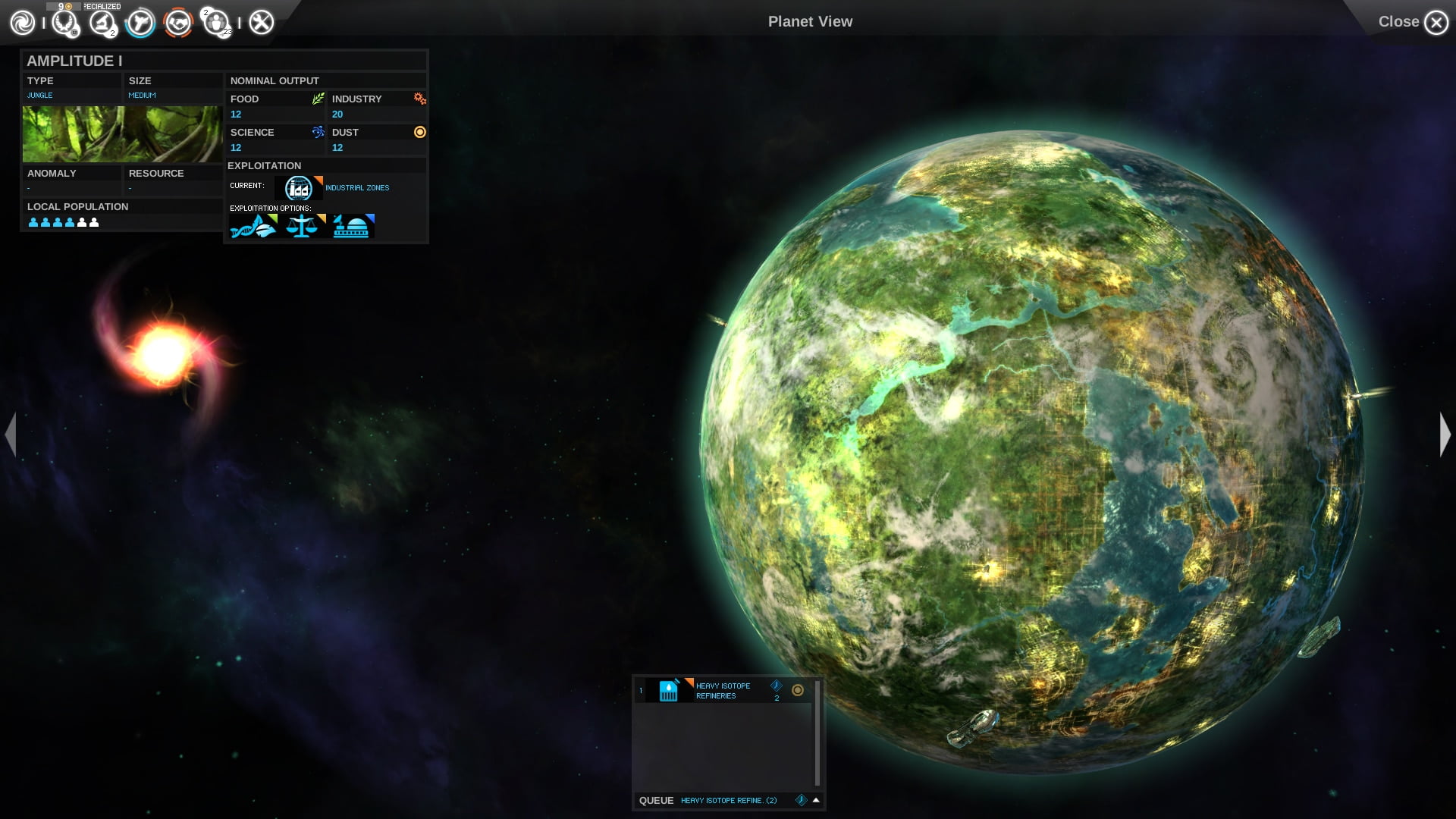 This game is also from the 4X strategy genre. It has been developed by Kerberos Productions. Players get to choose to play from the various races, and the goal is to colonize the star systems. This is also a multiplayer game, besides providing an option to pit a single player against AI. Its sequel was released in 2011, while the game was originally released in 2006. It is compatible with the Windows platform.

This game has been developed by Relic Entertainment. It is the first 3D game in the real-time strategy (RTS) category. There are two races to choose from – Kushan and Taiidan. Players are provided with the option of playing individually against AI or in a group. The game was released in 1999 and is compatible with the Windows platform. 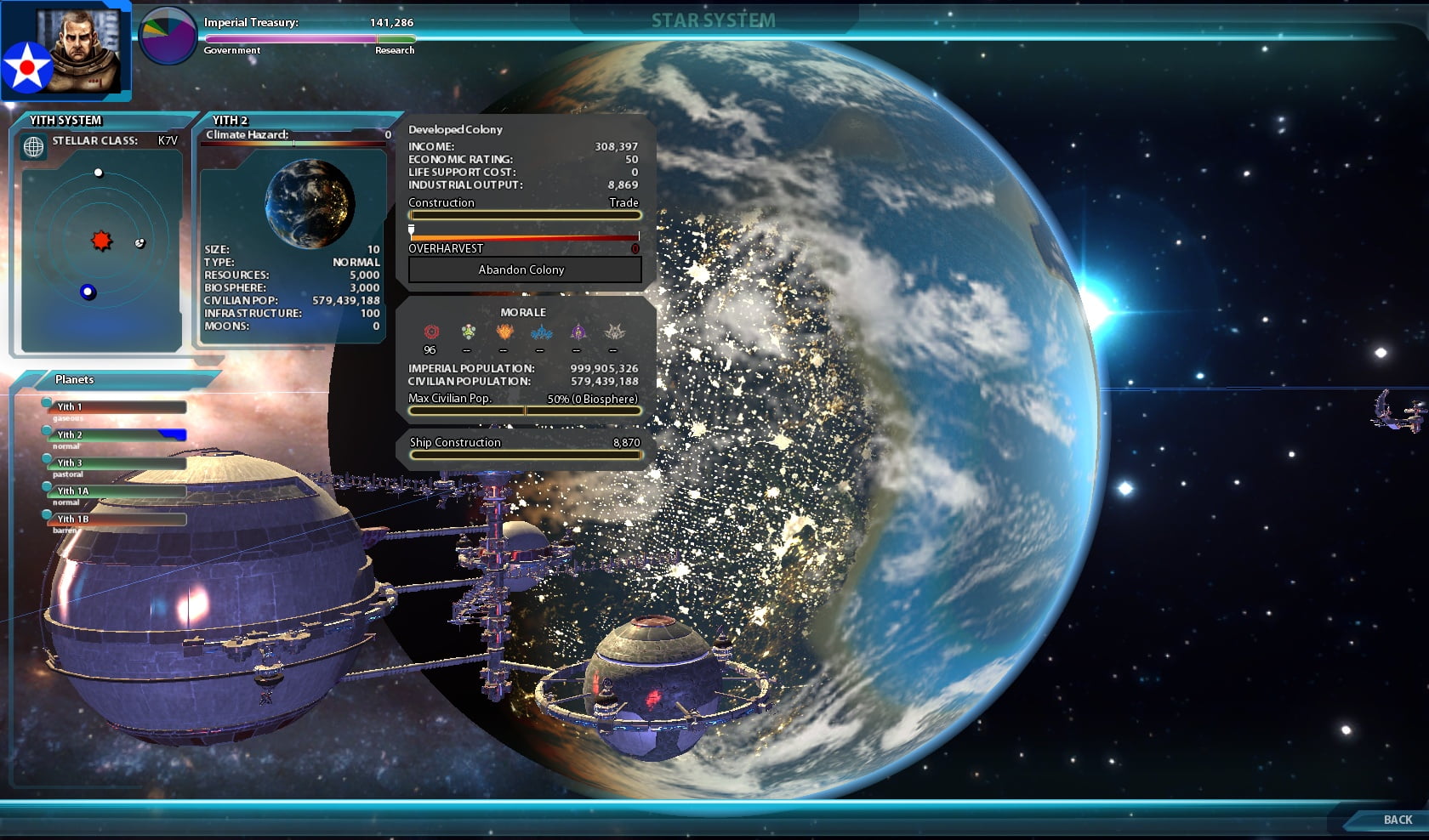 One more game in the category of the 4X strategy genre, this is a turn-based game, which has been developed by Amplitude Studios. This game has options for multiple players to play the same game, as well for a single player to take on AI. The plot takes place in 3000 A.D., where players are the leaders of their interstellar empires. Here, they can create their own civilizations, and one of the ways to achieve victory is by universal colonization. The battle scenes in this game take place in long-range combat, medium-range combat, and combat at close quarters. The game was released in 2012 and is compatible with the MAC OS and Windows platform.

Planetary Annihilation
This is a real-time strategy (RTS) game and has been developed by Uber Entertainment. Players are provided with a map consisting of various planets and asteroids. They have to capture these planets, which can also be annihilated by other planets. A player loses on losing the last commander of the fleet. This game draws heavy resemblance to Total Annihilation. It was released in 2014 and is compatible wit the MAC OS, Windows, and Linux platforms.

These were some of the top space strategy games for PCs, that provide a balanced mix of best of both the worlds or should I say, many other worlds.